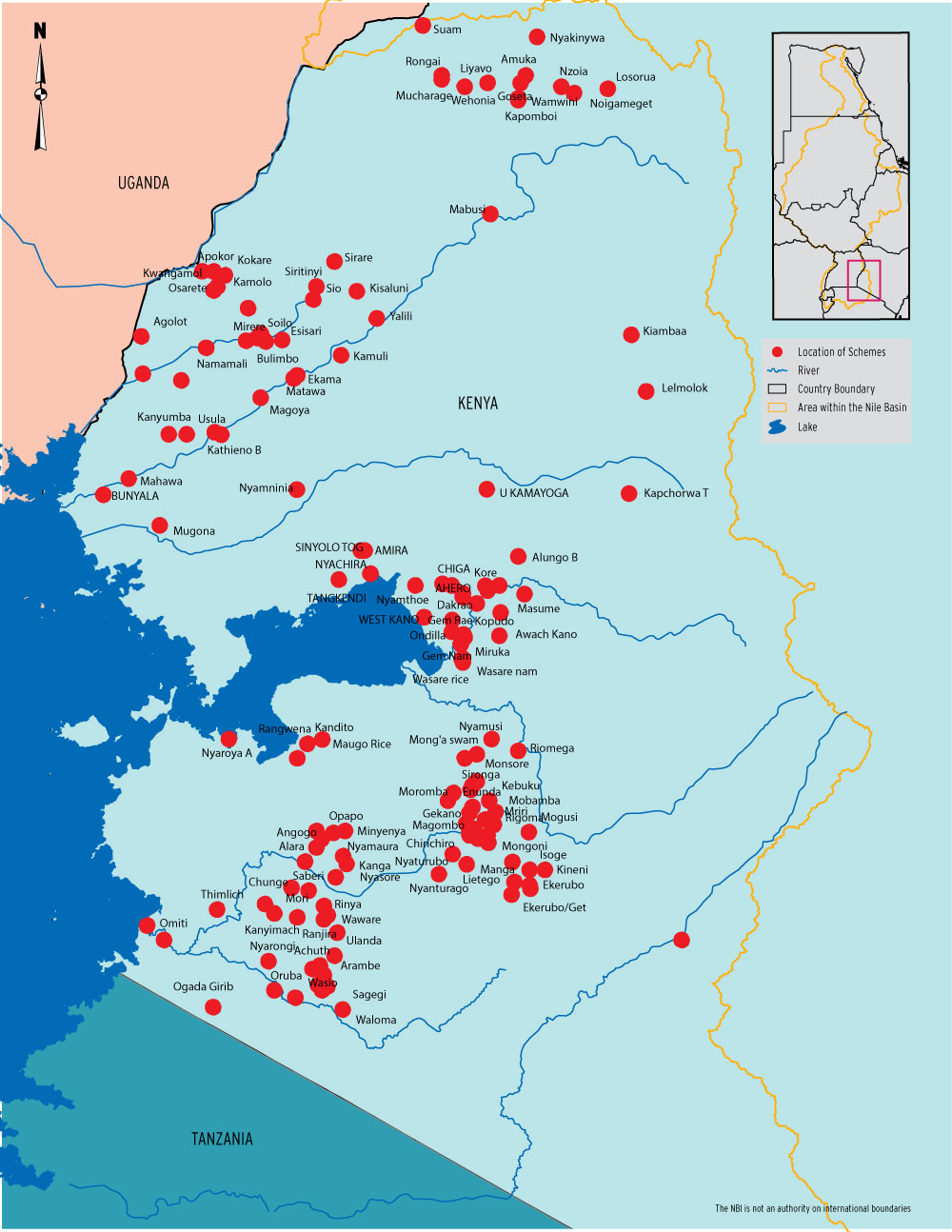 The total area equipped for irrigation in the Nile Basin parts of Kenya (Lake Victoria North and Lake Victoria South Catchments) is about 47500 hectares while the cropped area is on the average 20000 hectares. Most of these schemes are less than 300 ha in size. In 1957 some 1,691 hectares of this were under irrigation and by 2003, this had risen to 10,700 ha but this still represents only 5% of the irrigation potential in the Kenyan part of the Lake Victoria basin.

Public and Private Irrigation schemes in the Kenyan Nile basin include West Kano, Ahero and Bunyala irrigation schemes. Yala swamp development is being undertaken by a private investor called Dominion Farms Limited. The total annual average irrigation demand is estimated at about 367 MCM. The actual water use is estimated to be 307 MCM. The scheme level water supply reliability ranges from 66% for Sare to 100% for Nzoia downstream scheme. Almost all irrigation is achieved through run of river developments although water pans and small dams have been built the former being located in the medium potential zones. Basin, furrow and flood irrigation methods are used in most community irrigation schemes with sprinkler and drip being used on some private farms especially for the cultivation of flowers and horticulture crops. Greenhouses are used by commercial flower growers and also by some small-scale farmers in Kericho and Eldoret. The simple greenhouses are constructed from clear plastic material and are built on to timber structures. They cover on average ¼ acre and are irrigated by drip.

The total estimated irrigation water demand for all schemes is about 367 MCM and actual abstraction estimates lie at 307.5 MCM, which indicates a volumetric demand satisfaction rate of about nearly 84%. The major constraints and challenges to accelerated irrigation and drainage development in Kenya include: (i) Inadequate Public and Private sector Investment in the sector; (ii) Inadequate development of irrigation infrastructure and water storage facilities; (iii) Weak Irrigation Water Users’ Associations (IWUAs); and (iv) Inadequate support services.