While small-scale individual farmer managed irrigation in Ethiopia has a relatively long history, large scale irrigation started in the 1970s as part of the government owned state farms. Broadly, irrigation schemes in Ethiopia can be of any of the following four types:

The total area equipped for irrigation in Ethiopia in the Nile Basin is about 91,000 ha. All except one scheme lie in the Blue Nile sub-basin. Lying in relatively high rainfall area, irrigation of these areas is supplemental where the rainfall is expected not to meet the crop water requirements. Nearly half (46%) of the irrigation area depends on the flow of the Blue Nile without a storage facility that would regulate the highly seasonal flows of the river. As a result, the schemes face shortage of water during the dry season. With the exception of the Fincha irrigation scheme, which uses sprinkler system, all irrigation in Ethiopia in the Nile Basin relies on surface – gravity method for water conveyance and application.

Both irrigated and rain fed agriculture are important in the Ethiopian economy but virtually all food crops are rain fed with irrigation accounting for only about 3%. Export crops such as coffee, oilseed and pulses are mostly rain fed but industrial crops such as sugar cane, cotton and fruit are irrigated. Other irrigated crops include vegetables, fruit trees, maize, wheat, potatoes, sweet potatoes and bananas. Sugarcane is mainly cultivated as part of the Fincha sugar estate that also includes the Amerti-Neshe scheme. Overall, pulses make most of the crop cultivated in the irrigated systems 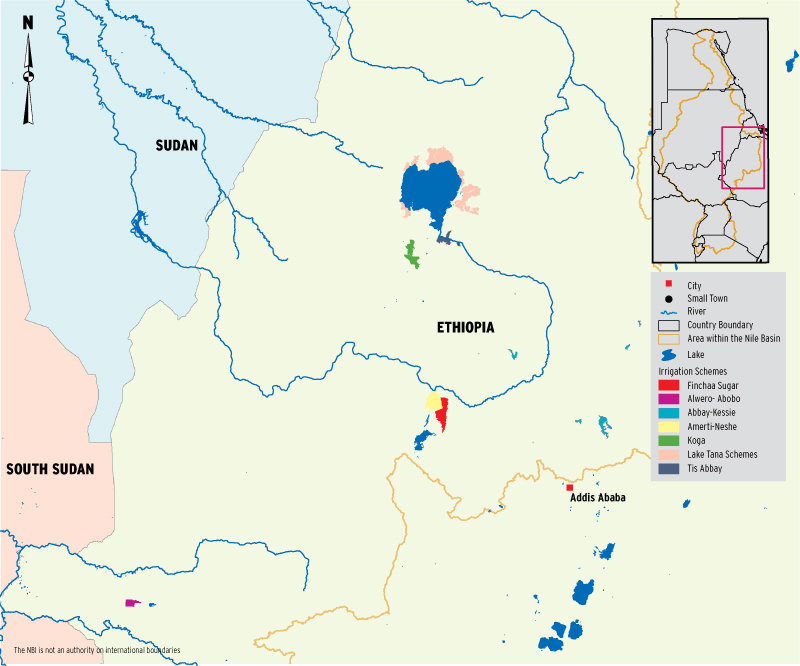