This chapter presents the current state of water resources monitoring in the Nile Basin. The focus of the chapter is primarily on hydro-meteorological monitoring with additional information provided on monitoring of water quality and groundwater. The
information in this chapter is based on data compiled by NBI from the riparian countries. No information was available for part of the Nile Basin that lies in Egypt and Eritrea. The monitoring network presented in this chapter includes only those networks
that are operated by national agencies for hydrological and meteorological monitoring services. It doesn’t include those monitoring stations that are established and operated by specialized agencies for specific purposes.

There were 928 meteorological stations in the Nile Basin in the countries surveyed in 2014. Most (674) of these stations measure rainfall only or rainfall and temperature while the rest measure fuller set of meteorological parameters. In addition to the
stations that are established and maintained by National Meteorological Services agencies, there are other networks that have been put in place for specific purposes. An example of such special purpose networks is the 19 hydro-meteorological stations
that are operated by the Kenyan Flood Diagnostics and Forecasting Centre (FDFC) in the Nzoia and Tana River basins. Such networks are not included in the Atlas. Overall, basic meteorological variables of precipitation, temperature, relative humidity and
evaporation are measured in all countries. Automated weather stations have been introduced in all countries though the distribution and area coverage greatly vary between countries. Data transmission from the stations in most countries is manual. As can
be seen from the table, telemetry is introduced in only five countries, namely, DRC, Ethiopia and Kenya. The telemetry system in DR Congo is part of the SADC- HYCOS. 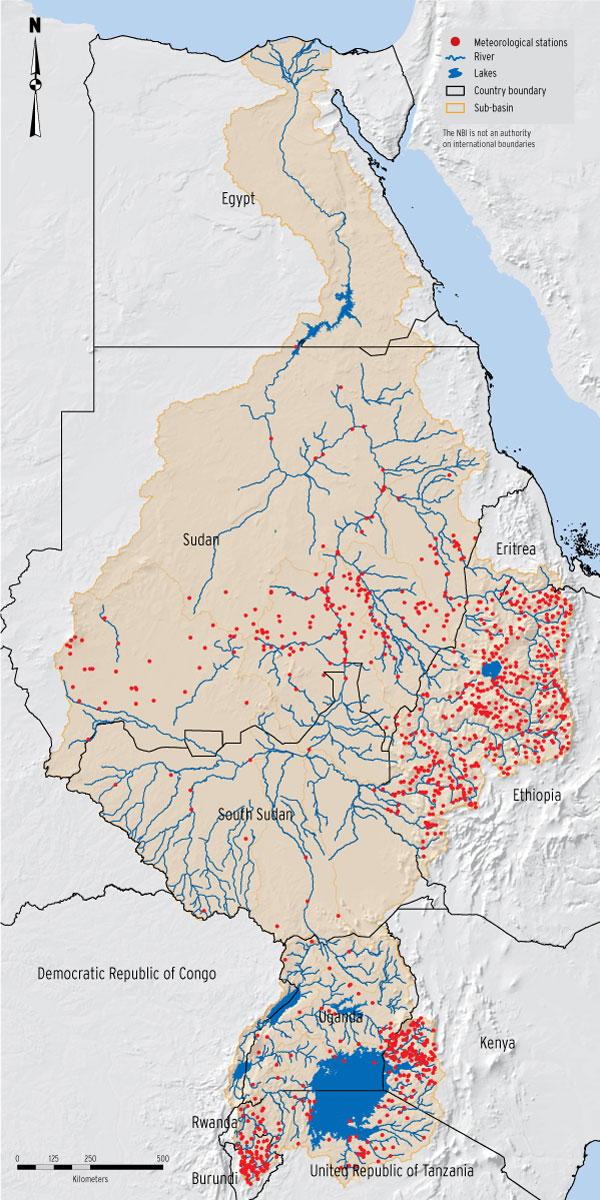 In most countries, meteorological monitoring started in 1900’s. The Hydromet Project (1967 – 1992) boosted river basin monitoring in the participating countries, namely, Egypt, DR Congo, Sudan, Uganda, Burundi, and Rwanda. Over the years, however, the number of monitoring stations declined in some of the countries. Charts are provided for Burundi and Uganda to indicate the historical growth and decline in number of meteorological stations for which data was available. 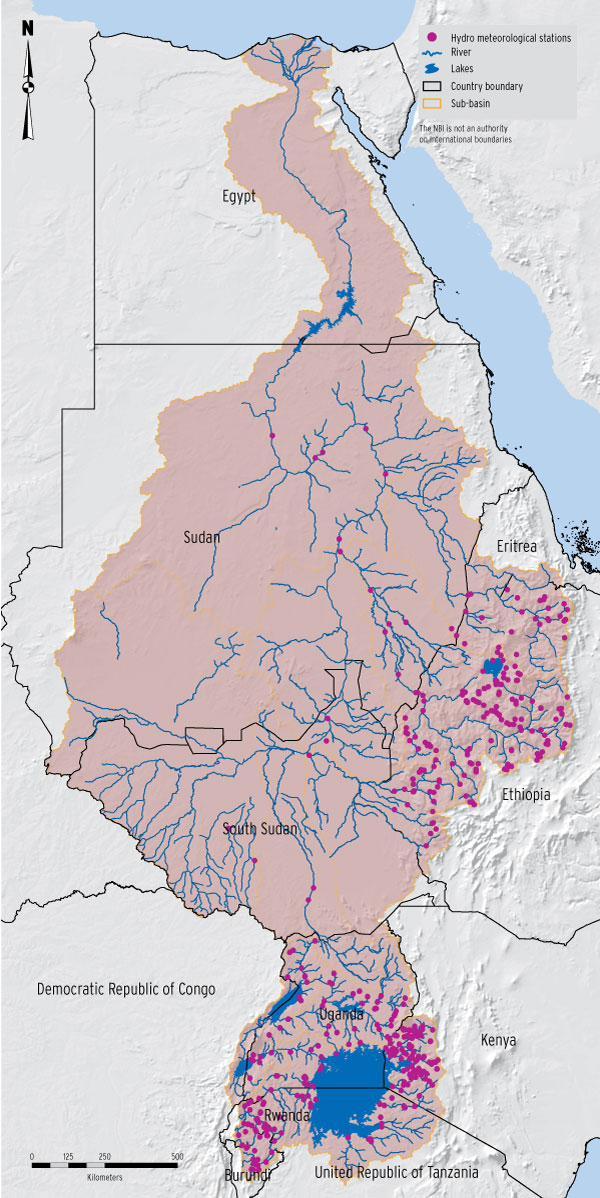 Most of the gauging stations employ staff gauges as the only instrument for water level measurement. The available capabilities of the countries with respect to hydrometric monitoring are shown in the table below.
Telemetry for automated data transmission has been introduced in Ethiopia, Uganda and Tanzania recently.

Water quality and sediment monitoring is practiced in very few countries, which is clearly a major gap in current monitoring networks in the Nile Basin. In most countries there is not sufficient capability (laboratories, mobile calibration labs, field sampling kits).

The situation with respect to data management and data communication capabilities is shown in adjacent table. None of the countries with the exception of Kenya, Uganda and Tanzania employ systematic data storage and management tools for managing the hydro-meteorological data. Only in few countries, for example in Ethiopia, Uganda, Tanzania telemetry system has been introduced to support near-real time data transmission.

Note: the Survey didn’t include Egypt

Uganda is a typical example of the development in national hydrometric monitorng stations. Expansion took place in the 1950’s and lasted up to 1970’s after which a decline took place. Presently the numbers seem rather stable, but this does not necessarily
reflect an output in terms of a steady flow of reliable data. The exception is Sudan, where measurement of river flow started as early as 1902. Over the years, there has been a general decline in the number of stations that are kept operational or added
to the network. Graphs that show how the number of stations evolved in the last several decades are provided here for those countries for which reliable data have been obtained. It can be observed that the early 1950’s and 60’s exhibited expansion of
the monitoring network as more and more stations were added. The late 1960’s and early 1970’s showed considerable increase in number of stations due to partly the implementation of the Hydromet project that was a collaboration project between countries:
Egypt, DRC, Sudan, Uganda, Burundi, Rwanda.