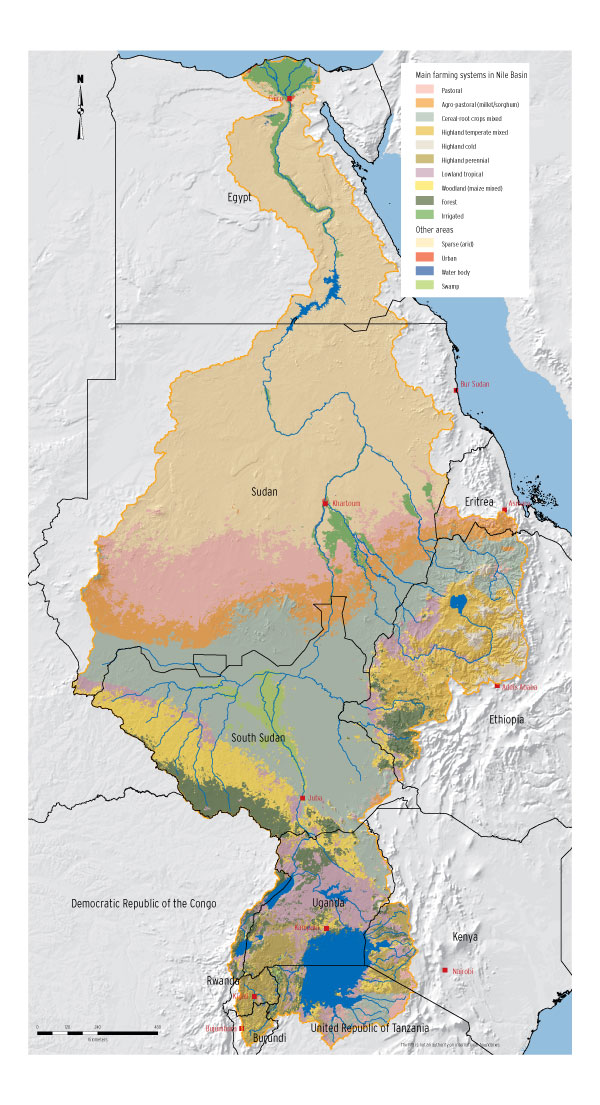 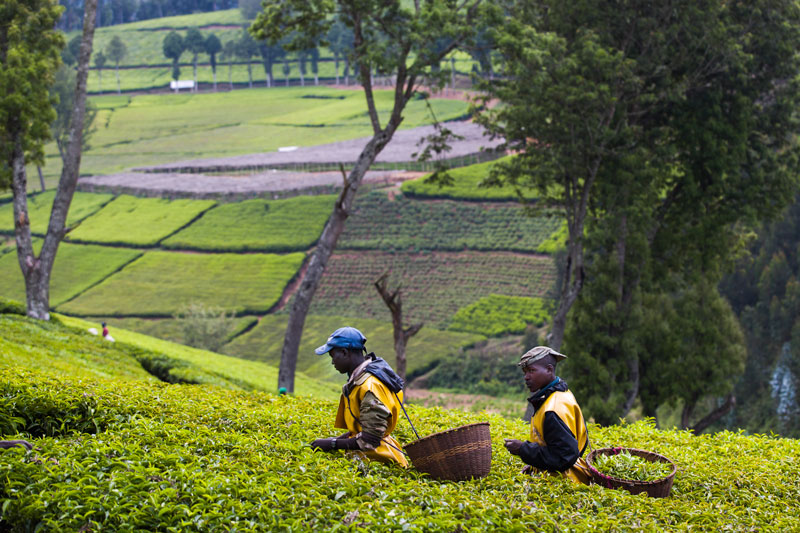 This farming system comprises large scale, traditional, small scale traditional and commercial. In many cases, irrigated cropping is supplemented by rainfed cropping or animal husbandry (the Gezira is one notable exception). Crop failure is generally not a problem, but livelihoods are vulnerable to water shortages, scheme breakdowns and deteriorating input/output price ratios.

Farmers practice shifting cultivation; clearing a new field from the forest every year, cropping it for 2 to 5 years. Cattle and human population density are low. Physical isolation plus lack of roads and markets pose serious problems. Agricultural growth potential is moderate but development requires careful management of environmental risks, including soil fragility and loss of wildlife habitats.

This farming system is found in Ethiopia, Uganda, Rwanda and Burundi. The system supports the highest rural population density in the region. The farming system is based on perennial crops such as banana, plantain, and coffee, complemented by cassava, sweet potato, beans and cereals. The main trends are diminishing farm size and declining soil fertility.

This farming system is located at altitudes between 1800 and 3000 metres in the highlands and mountains of Ethiopia and smaller areas are found in Eritrea. Small grains such as wheat and barley are the main staples, complemented by peas, lentils, broad beans, rape, teff (in Ethiopia) and Irish potatoes. Typically there is a single cropping season, although some parts of Ethiopia have a second, shorter season. There are major problems in the farming system: for instance, soil fertility is declining because of erosion and a shortage of biomass; and cereal production is suffering from a lack of inputs. There is, however, considerable potential for diversification into higher-value temperate crops.

This type of farming is found mainly in the dry sub-humid zone. Although the system shares a number of climatic characteristics with the Maize mixed system, other characteristics set it apart, namely; lower altitude, higher temperatures, lower population density, abundant cultivated land, higher livestock numbers per household, and poorer transport and communications infrastructure. Although cereals such as maize, sorghum and millet are widespread, wherever animal traction is absent root crops such as yams and cassava are more important than cereals. Intercropping is common, and a wide range of crops is grown and marketed. The main source of vulnerability is drought but the agricultural growth prospects are excellent.

The farming system is the most important food production system in Kenya, Tanzania and Uganda, but also found in Ethiopia and South Sudan. The most typical areas have uni-modal rainfall, but some areas experience bimodal rainfall. The farming system also contains scattered irrigation schemes, but these are mostly small-scale. Where a bimodal rainfall pattern occurs farmers have two cropping seasons, but in drier areas they usually harvest only once a year from a given field. The main staple is maize and the main cash sources are cattle, tobacco, coffee and cotton, plus the sale of food crops such as maize and pulses. The main source of vulnerability is drought.

For the Nile Basin countries, this system of farming is mainly found in Sudan, South Sudan, Ethiopia and Eritrea. Crops and livestock are of similar importance. Rainfed sorghum and pearl millet are the main sources of food and are rarely marketed, whereas sesame and pulses are sometimes sold. Livestock are kept for subsistence (milk and milk products), offspring, transportation (camels, donkeys), land preparation (oxen, camels), sale or exchange, savings, bride wealth and insurance against crop failure. The main source of vulnerability is drought, leading to crop failure, weak animals and the distress sale of assets. Agricultural growth potential is modest and presents important challenges.

This system is located in the arid and semiarid zones extending from Sudan, Ethiopia and Eritrea. During the driest period of the year, Sahelian pastoralists move south to the Cereal-Root Crop Mixed System areas and they return north during the rainy season. The main source of vulnerability is the great climatic variability and consequently high incidence of drought. Sparse (Arid) Farming System The system is mainly found in Sudan and Egypt. It is of limited significance from the point of view of agriculture. Because the wadis and their surrounding areas are considered part of the Pastoral Farming System, grazing within the actual Sparse (Arid) System is limited. There are some scattered irrigation settlements in these arid areas, in most cases used by pastoralists to supplement their livelihoods.

The system is mainly found in Sudan and Egypt. It is of limited significance from the point of view of agriculture. Because the wadis and their surrounding areas are considered part of the Pastoral Farming System, grazing within the actual Sparse (Arid) System is limited. There are some scattered irrigation settlements in these arid areas, in most cases used by pastoralists to supplement their livelihoods.